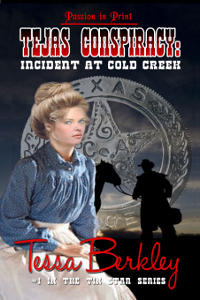 Texas Ranger on the trail of a killer is drawn to a beautiful widow determined to hold on to her ranch, finds themselves in the center of an elaborate land grab scheme that endangers their lives.
Texas Ranger, Tyrone Dixon is sworn by honor and the star on his chest to get his man. But, when his lead turns up dead, he resorts to distorting the truth to a beautiful woman to catch who is behind a land grab scheme. A twist of fate finds Lily Prentiss a widow. Now, her future hangs on her ability to turn her ranch around. Can she trust the mysterious cowboy who has promised to help?
With a cut of the cards, both can lose their lives or is this just another Incident in Cold Creek that won't be explained?

Posted by colleen m No comments: 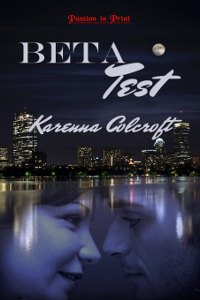 Is it possible for a Beta werewolf to have a human mate, or must Justin Ruel give up the woman he loves?


Tareth McConnell has learned not to count on anyone other than herself, and really isn't in the market for a relationship. But the first time she sees the man with his long hair in a braid on the subway, she's strangely drawn to him. Despite that, a month passes before they say more than hello to each other.
The first time Justin Ruel speaks with Tareth, he knows there's something special about her. Something different. If he didn't know better, he would swear she was his mate. But Justin is the Beta of the City Pack, the largest werewolf pack in New England, and there's no possible way he could have a human mate. At first, Justin tries to hide the truth from Tareth. When a series of attacks occur on pack members, Tareth's life might be endangered, and Justin has no choice but to tell her--even if that means losing her forever.
Posted by colleen m No comments:

Colleen: Hi! Today we are sitting down with one of Passion In Print’s debut authors, Elizabeth Haysmont. Welcome Elizabeth! Do you recall the very first book you read that turned you on to romance/erotic romance books?

Elizabeth: Absolutely! Jane Eyre in AP English in high school. I was so mad when Jane left Rochester and felt she really should have stayed. Even in high school I thought, “He’s rich enough; they could move to Fiji and no one would know the difference!”

Colleen: Why do you write?

Elizabeth: Plantser. I start out with a basic plot and I often deviate from it when a better idea hits me before the “official” editing process starts.
Colleen: Listen to music while you write? If so who?

Elizabeth: I like to have music on to drown out the distractions of background life, such as noise from outside or the two cats playing or the dog ‘woofing’ to let me know something is going on outside. I usually listen to classical and medieval, but sometimes rock and blues. I love The Beatles and Rory Gallagher. Whatever I listen to, I have to create a short playlist and loop it, so it plays ad nauseum so I tune it out. To be honest, I could probably use white noise from an untuned radio and have the same benefit.
Colleen: When you first start writing do you write from beginning, middle or end?

Elizabeth: I’ve never tried to start a first draft from anyplace but the beginning of the story (although I’ve added and subtracted beginnings). I’m told it can be liberating to just write whatever scene occurs to you at the time.
Colleen: Do your stories require research? Do you travel or just go to the library/web to gather your information?

Elizabeth: My stories do require research but I’m a history buff so sometimes research inspires the story. I’ll create stuff based on what I already know and do additional research to expand my imagination.
Colleen: What inspires you?

Elizabeth: My sources of inspiration are too numerous to list here, but when I try to narrow it down, I’d say I’m mostly inspired by the need to share little known lives and locations, like I’ve discovered something special I’m so sure more people would enjoy if they only knew more about it. The irony of course is that I then proceed to change it all so it suits my story.
Colleen: What is your current story?

I’m working on a sequel to The High Bridge which was released May 19th via Passion in Print Press. The working title is The Far Bridge, another adventure story, this time involving a young Anglo-Egyptian doctor on a mountaineering trip in the Rocky Mountains. He gets lost and as he and his climbing partner Seth Montclair are route-finding, he witnesses through his binoculars a group of women on another mountain peak surrounded by dancing blue light, like a St Elmo’s fire. He realizes that they are performing some sort of ceremony. Later he meets one of the women when she shows up at his free clinic bringing her grandmother (who he recognizes from the mountain peak) when the old woman is ill. Not only is he intrigued by what was happening on the mountain, he’s infatuated by the young woman. This sets them up for love, romance, and adventure, once again in the wilderness of the Rocky Mountains near Winter Park, Colorado (known in the story as Seasons Park, CO.)
Colleen: What do you have coming out next with Passion In Print Press?

Elizabeth: My current novel The High Bridge was just released through PIP on May 19th and should be out soon (if not already) on Amazon. It’s the story of cynical but determined investigative reporter who originally traveled to Colorado to debunk the story of a haunted hotel but ends up uncovering a ghost train that is haunting the mountain road nearby. After crashing her motorcycle to avoid being struck by lightning, she’s found by the man she’d hired as a guide the day before. There’s more to him than she ever thought, and while he’s trying to get her off the mountain and to a hospital, they discover a new way to deal with the strong attraction they feel for one another. They also uncover a secret 65 soul-wrenching years in the making.
Colleen: What groups or social media networks can readers frequently find you posting and chatting in?

Elizabeth: I love making new friends. Find me on Twitter @Eliz_Haysmont or Facebook at facebook.com/Elizabeth.Haysmont.Author
It seems Elizabeth Haysmont’s entire life has been dedicated to research. At least that’s the spin she’s putting on it when she tries to explain why so many of her real life experiences end up in her books. Motorcyclist, photographer, graphic artist, traveler, caver, history buff, rail buff, hiker, off-roader, musician, actor – Life has dragged her (with her husband of twenty-two years) through 35 states and six foreign countries. She and her husband even chose an adventurous way to wed: in a cave near St. Louis, 50 feet underground. Visit her website at http://elizabethhaysmont.com/
Posted by colleen m No comments: